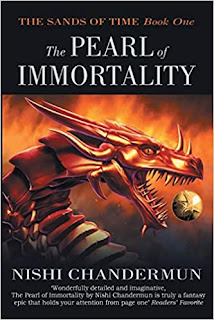 Book Review: "The Pearl of Immortality" by Nishi Chandermun is a work of fantasy fiction and is the first book in the Sands of Time series. The book is a universe in itself which is quite magical, thrilling and adventurous. One gets reminded of Tolkien's universe and J.K. Rowling's 'Harry Potter' series while turning the pages of this book. A world where Light and Dark clash to rule over the planet of Ishtar over a span of different time periods and ages.

Xerxes is magically transported to Ishtar along with his best friend Kaspar via an ancient golden lamp. Landing in different dimensions of Ishtar, both friends continue their separate journeys for a while. While Kaspar discovers that he is a Veerkah warrior with power from wolves, Xerxes learns about his new identity of Dragonheart and that the future of planet Ishtar rests upon him. Meanwhile, the evil Naga King and Queen foresee their arrival leaving no stone unturned in releasing perils to hinder their progress and stop the prophecy. Together with his Grandmaster Nab, a shapeshifting spider-elf named Siri and his dragon called Sesha, Xerxes must embark on a journey to find the pearl of immortality for his dragon and also discover the power behind the Sands of Time. However, their mission gets increasingly drawn towards a quest to find the Simbirida herb and the Jade Dagger, an indestructible powerful weapon, which can lead them to the pearl in order for Xerxes to become the true Dragon Warrior for defeating evil.

This story will truly fascinate fantasy readers as they encounter a world of Men, Nemurs, Elder Gods, Aryans, Bazilians, Elfs and many more interesting creations by the author. The magical world of Ishtar with speaking doors and hugging trees will enthral the audience if this series is ever adapted on-screen. The protagonists overcome many perils fighting a variety of evil creatures and journeying across myriad landscapes in land, air and underwater. The glossary of character and spell names at the end of the book is a helpful addition. One needs to read this highly recommended adventure book as the author promises to come back with a sequel.